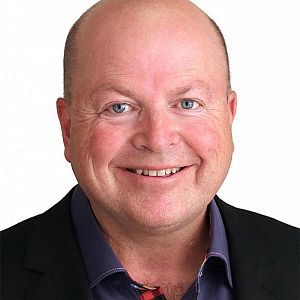 Jerry began his career at RE/MAX Kelowna in 2003, at the time partnering with Gerald Geen. Continuing on in the Geen family real estate legacy, Jerry has enjoyed many prestigious awards throughout his time in the industry including Chairmans Club and has even been inducted into the RE/MAX Hall of Fame and received his Lifetime Achievement Award. His knowledge of the community and agricultural land are unparalleled in the industry.

In 2016, Jerry and Elya together hit their highest award level ever being named into the Titan Club under their new team designation, the highest award received by either of them to date.

Jerry worked as an independent agent with RE/MAX Kelowna after Gerald retired, consistently ranking in the top selling agents for the office. Jerry and Elya worked together in an unofficial capacity for several years. Soon it became quite evident it was time to make it official and in 2015 the ‘Geen+Byrne Real Estate Team’  was formed.

Jerry’s dedication and panache are thoroughly evidenced through his many individual accomplishments but most importantly the rave reviews he receives from happy clientele. Jerry has proven his honest and genuine way of doing business is very successful.

Prior to his whirlwind real estate career, Jerry was an award winning photographer participating in various high profile shoots  including the Tommie Awards where he honed his skills in real estate photography. While photography remains one of Jerry’s passions, his professionalism, analytical nature, and excellent ability to "connect" with all types of people, make Real Estate the perfect fit!

Now his work in the photography field is limited to his listings. That’s right! Only Geen + Byrne clients have access to his renowned skills now.

Jerry is a member in excellent standing of the following professional associations: